At first glance, the thought of conducting launches in Florida may not sound like great idea. There is the fact that no US state sees more lightning strikes than the sunshine state. If that is not enough, there is also the threat for hurricanes that ramps up during the summer months and continues into the fall. Florida experiences more landfalling hurricanes than any other state. The folks at NASA realized that these factors would prove difficult at times, but other factors outweighed the inherent risks that came with setting up their operation in Florida.

One of the not so obvious reasons for this decision is the advantage that being that far south and along the East Coast offers. The reason is related to a concept called linear velocity. As the Earth rotates in a west to east manner, every point on the globe is moving at a constant angular speed. However, depending on how close you are to the equator, the Earth's linear velocity increases. This is because the Earth has to travel the fastest to complete one revolution at the equator than anywhere else along the globe. The Earth's linear velocity is actually 0 at the North and South Poles. This is similar to riding a merry-go-round. When you ride a merry-go-round the closer to the outside edge you are, the faster your linear velocity is. So if you want the fastest horse always chose a horse as close to the outside edge as possible. When a rocket launches from the Earth it capitalizes on the Earth's linear velocity, which makes for a fuel-saving boost for a rocket exiting Earth closer to the equator. The European Space Agency saves even more fuel than the US as their launch facility is located in French Guiana (located in northeast South America). The site is located at just 5 degrees above the equator.

The second benefit is related to the advantage of launching in a place with a vast ocean located to the east. When using the boost giving by the Earth's linear velocity, the rocket will naturally acquire an eastward bearing. To visualize this think of what would happen if you were pushed off the merry-go-round. Your momentum would direct you out and veer you in the direction that the merry-go-round is rotating. This is why rockets will naturally veer east unless they use extra propulsion to keep that from happening. Having the open Atlantic basin to the east of Cape Canaveral is an ideal placement, as any danger from falling debris or explosions are directed over open water, rather than any population centers. 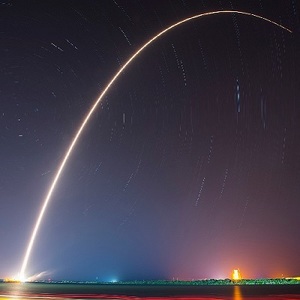 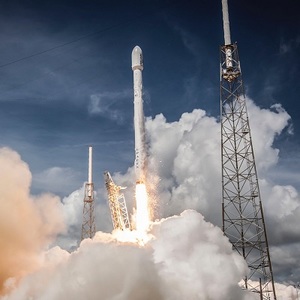