Professor Paul Thursday-Why Is It Called Hoarfrost? | weatherology°
This website uses cookies to improve your user experience and for analytical purposes. By clicking the "Accept & Close" button, you agree to the storing of cookies on your device while using this site. Please see our privacy policy to learn more about how and why we use cookies.

There are certain mornings during the winter season where there can be an almost magical look to the landscape. The look of freshly fallen snow lying on the trees or a coating of heavy frost can achieve this result. The type of frost that can produce this picturesque scene is known as hoarfrost. For such a beautiful phenomenon, the word chosen to describe it does not seem to capture its essence.

The first known use of hoarfrost came during the medieval period in England during the 13th or 14th century. It is not known who first used the term to describe a layer of frost, but at some point the term entered the lexicon of the English language. Its root is taken from the old English adjective "hoary" which means, gray or white in appearance. This word was often used to describe a person of age who had white hair and a white beard. Knowing this, it now makes sense how one would look at a frost-covered tree in that age and call the frost covering it hoarfrost.

Now that we know the origin of the word, let's look into the science of hoarfrost. Hoarfrost forms on clear and calm nights, when the air is not only cold but also moist. The moisture in the air is a gas known as water vapor. When the water vapor comes into contact with objects that are well below freezing, it freezes onto that object. This change of state from a gas to solid ice results in the accumulation of what we know as frost. When a particularly heavy layer of frost coats the objects, it is described as hoarfrost.

Now that you know the origin of the word, you can appreciate the brilliant winter scenes that it is known for even more! 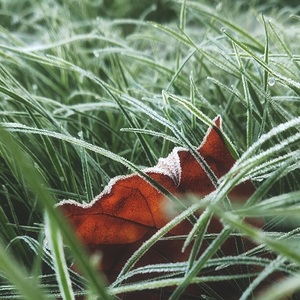