Professor Paul Thursday - The Jet Stream and Air Travel | weatherology°
This website uses cookies to improve your user experience and for analytical purposes. By clicking the "Accept & Close" button, you agree to the storing of cookies on your device while using this site. Please see our privacy policy to learn more about how and why we use cookies.

Today's Topic: The Jet Stream and how it impacts Air Travelers

Anyone who has flown on a plane may have noticed that the flight times from one city to another can vary, even when the flight is covering the same amount of miles. The most likely reason for this is due to the impact of the jet stream. Jet stream winds usually max at a height of around 30,000 to 35,000 feet. Meanwhile, commercial jets typically reach their cruising altitude near the same level. If the plane is going with the flow, it gets a tailwind to boost its speed. This makes for good fuel economy and some faster air speeds to get you to your destination a bit faster. Let's dig further into what the jet stream is and when it can make a difference in flight times.

Anyone who has walked into a stiff breeze knows what kind of force the wind can have on them. When it's going with you, walking can seem effortless compared to when heading into it. Airplanes work with this force brought on by the jet stream daily. Certain flights are affected more than others, but generally, westbound flights will take longer than eastbound ones. For example, a flight from Los Angeles to New York City will be in the air for just under 5 hours. Meanwhile, flying back to Los Angeles from New York City averages a time of 5 and a half hours. The difference in these times can be even greater when the jet stream is oriented more favorably (or unfavorable if you are flying into it) along the flight path.

On February 18th, 2019, an impressive jet stream with speeds over 200 mph set up from southern Missouri towards Long Island, New York (see the provided image). Jet stream winds were actually clocked over 230 mph at Long Island on this day. At the same time, a flight from Los Angeles to London got into the sweet spot of a jet streak over Pennsylvania, and the jet reached a speed of just over 800 mph (typical velocity for commercial jets is between 500 and 600 mph). Needless to say, many eastbound flights were making up time in the air on that February day! 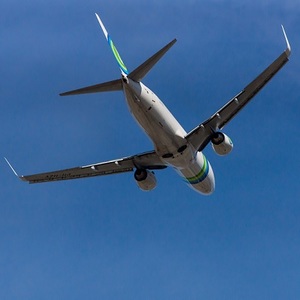 Flight times will generally be faster when flying to the east thanks to the tailwind provided by the jet stream.
Next
Wildlife Wednesdays: Fernandina Giant Tortoise