Today's Topic: The Science Behind Why Leaves Change Color in the Fall.

The explosion of fall color is a highly anticipated event each season.  The colors that emanate from the deciduous forests across the country produce breathtaking views that are enjoyed by many.

To understand why leaves change color, one must understand why leaves are green throughout the spring and summer seasons. This is due to the abundance of the green pigment chlorophyll. Chlorophyll plays an important role during the growing season as it harvests sunlight, thereby providing the energy needed to carry out photosynthesis. During late summer and fall, the diminishing amount of sunlight triggers a decrease in chlorophyll production, resulting in a decay and eventual absence of chlorophyll within the leaves. As the amount of chlorophyll decreases, the leaves true colors begin to be unveiled. A pigment called carotene, which is the same pigment that gives tomatoes their orange and yellow coloring, is naturally occurring in many leaves. This pigment becomes visible in autumn thanks to the decay of chlorophyll. Aspen, birch, and maples give beautiful displays of yellow and orange each fall season. Sugar producing trees, such as maples, add an extra wrinkle to the fall color display. During the fall, maples produce sugars which results in the production of a pigment called anthocyanin. Anthocyanin is directly responsible for the red hues that appear in many varieties of maple trees.

The timing of the peak of fall color can be altered by the weather patterns that occur each season. An early frost can set the leaf color change into motion earlier, while an unseasonably warm fall will result in a later fall peak. A cloudy and rainy fall season can result in a muted fall color display, while sunny and seasonally cool weather patterns can enhance it. 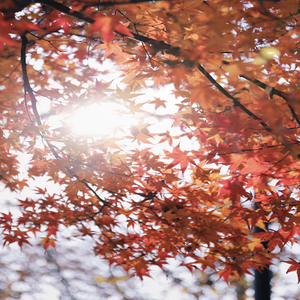 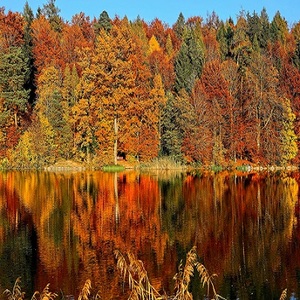 Reflection of fall foliage in a calm lake 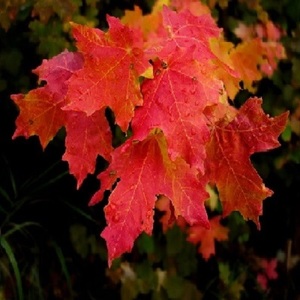