Professor Paul Thursday-How Wx Impacted the 1st Moon Landing | weatherology°
This website uses cookies to improve your user experience and for analytical purposes. By clicking the "Accept & Close" button, you agree to the storing of cookies on your device while using this site. Please see our privacy policy to learn more about how and why we use cookies.

During the space race that went at a feverish pace during the 1960s, many calculations needed to be solved in order for each mission to be completed successfully. From when JFK asked NASA to find a way to land on the Moon in 1961, it took 8 more years until all the challenges involved in attempting a moon landing were figured out. Rocket trajectories, propulsion, and fuel needs are the first things that may come to mind, but preparing for the weather conditions that would be experienced on the Moon was also integral to the success of the first lunar landing.

It isn’t often that you think about the climate of the Moon, but it certainly was a major factor that had to be considered when a moon landing was being planned for Apollo 11. Lunar temperatures are about as extreme as we have been able to measure anywhere in the Solar System. Since the Moon has no atmosphere, the Sun’s rays strike the lunar service with no filter. This allows temperatures to climb to around 260 degrees Fahrenheit on the sunny side of the Moon. Conversely, the dark side of the Moon sees extreme cold due to the lack of an atmosphere. Just as atmospheric gases filter the Sun's incoming energy, they also trap some of the heat that tries to escape back to space. This allows for an extreme amount of heat to leave the surface of the Moon when it is in darkness, resulting in plummeting temperatures to as cold as -380 degrees Fahrenheit at times.

A lunar day lasts about 29 Earth days. This means the Sun shines for about 2 weeks straight, followed by 2 weeks of darkness for a cycle to be complete. NASA knew that the best time to land the Eagle spacecraft would be in an area where the Sun was just starting to shine (or during lunar dawn). This way, the most extreme temperatures of the Moon could be avoided. Even then, Buzz Aldrin and Neil Armstrong would have to be able to withstand extreme heat during the lunar landing. Water-cooled suits were worn, and their time on the Moon was limited to less than 3 hours in order to avoid hyperthermia. The exterior of the suits were fashioned to be highly reflective, so as not to heat up. Special footwear was also placed over their space boots that had several layers of thermal protection built into them.

Aside from the extreme temperatures, the Moon has little in the way of elements that we often associate with weather. With no wind or precipitation, the only disturbance to the surface is an occasional piece of space debris. Because of this, those first steps made on the Moon back on July 20th, 1969 have remained preserved in the moondust to this day. 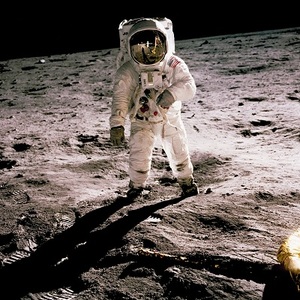