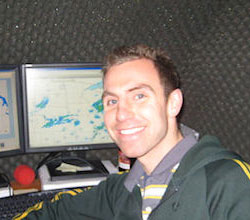 Sam Dunaiski grew up in Duluth, MN. He loves the fact that Duluth is clean, laid-back and slow paced. He also enjoyed the various weather that Duluth would have year round. It wasnt until high school that he decided to study meteorology. His high school guidance counselor told him to pursue a job that you will have an interest in all the time. And that is what led Sam to a degree in weather. Sam attended UW-Madison and received his B.S. in Atmospheric and Oceanic Science. He is the oldest of three and is married.

Favorite Sport? I used to participate in high school basketball and soccer, but now I am an avid runner. I have completed two marathons and several half marathons.
When I was younger I wanted to be? An archeologist, Indiana Jones inspired me a little bit, plus I just wanted to play in dirt! A paleontologist job interested me as well. But if I had to go back to school for something, it would be culinary school. I would love to be a chef. (I've been told I look like Bobby Flay.)
Favorite CD/Album? Hands down... it has to be Weezer's Blue Album. It's the first cd that I could listen to every single song.
Proudest Moment? It's a tie between a chicken McNugget eating contest (58 nuggets in 10 minutes.) and watching my wife defend her PhD thesis in genetics.
Who We Are...
Weatherology is the latest innovation from the Weather Eye Radio Network. For nearly 30 years, Weather Eye has been the industry leader in weather programming for the radio industry. Many of our listeners rely on the accurate and dependable forecasts generated by the Weather Eye team. Weatherology aspires to place those same powerful forecasting tools in the palm of your hand.
Our new web site was designed to eliminate the frustration and complexity associated with most online weather web sites. In addition, weï¿½ve incorporated the latest social networking tools into our presentation to enhance the quality of up to the minute content we provide our online community.
Read More...
© 2012-2021 Weatherology Mobile, LLC. | | |